Woah! It's been a while since the last post here. I've been very busy working in a couple of freelance projects and I haven't been able to find the time to write. I'm using twitter a lot these days, so I'd say it's a nice way to contact me :)

Yesterday, the fourth edition of bitbitjam came to an end. This has been the third time I've joined this jam and the second time I've worked in a Game Boy game for it. On this occasion I've teamed up with my friends zalo (coding) and kirblue (level design). My work was all about art: music, sound effects and graphics. You know, I can't call myself an artist, but I have lots of fun pixelling around!

The week before the jam started, we were wishing to make a Zelda-style game, with an action-RPG gameplay, a little bit of dialogue, NPC puns and all that... but then, the theme was made public...

So we had to deal with 'Velcro Sheep' and design a game that just used one key as input. Mixing these two elements with our initial idea of a Zelda-ish game was impossible, so we decided to take a different approach and tried to make something fresh. In the beginning we thought the theme to be extremely restrictive, but finally, after having the initial concept, we felt extremely satisfied with it.

So first Friday, we basically decided the idea of the game and went to have some beers in the monthly gamedev meeting of the city... 'Just a couple of beers'. 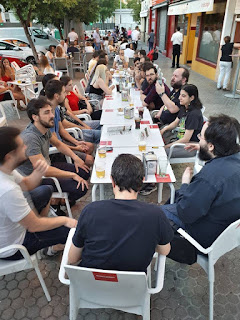 Of course a hangoverish saturday came along.

After some rest, a nice amount of tortilla with salmorejo and countless glasses of water, we had some decent core gameplay at night. We had the basic elements: a kawaii sheep jumping and climbing around with the only use of a button, a couple of enemies and some special platforms. This was the state of the game saturday evening:

On Sunday morning, kirblue started working on level design with us. He's designed great levels of increasing difficulty that have an awesome sense of progression. Very nice work!!

The last day of the jam arrived and everything seemed to be ready... except GameJolt servers. That's just random technical stuff that happens! After the uploading issue was solved, we had 13 new awesome retro games. Woohoo!! You can play Polka Sheep here and you can check its repository here!

Tools and Weapons of Choice

This time, the main technical evolution has been using a SDCC version that included lots of fixes to the previous one we were using. For the rest, we've used the same collection of tools: ZGB, GBDK, GB Tile Designer and Map Builder, mod2gbt and gbtplayer and BGB. I also used the fixed version of GBSoundDemo, an extremely useful ROM to design your own sound effects.

For the static screens, I used Aseprite and the awesome Game Boy Tile Data Generator. It's a bit of a hassle to use 256 tiles for every screen (it doesn't check if the generated tiles are used more than once), but it's fast, and as we're not going to make physical copies of this, we don't care about ROM size. It's so painful to use the Tile Designer and the Map Builder for such big screens... I found other bmp2gb converter that features tileset optimization, but it was just usable for the Game Boy Color. Maybe for the next jam!

I used OpenMPT, my favorite tracking software, to write the music for the game. The tunes were supposed to be polkas in the beginning, but they're a mix of bluegrass and Johnny Techno-Ska haha. The system we're currently uses lacks lots of important features for GB music: volume envelopes and vibrato. Volume envelopes are essential to avoid the classic audio clicks that the constant volume channel reset outputs. I'm thinking about giving MML+XPCMK an opportunity for the next game... Let's see if I can practice with it!

Overall this jam has been a great experience for me. It's been fine to have a complete week to produce a retro game with such a great team! Having kirblue on board with us it's been awesome, because he's iterated the design of each level a lot, and thanks to that, the game feels more fun and polished than the average game jam prototype.

It's also been great to get to a simple and fun concept so easily. There are jams where you just can't get to anything funny or think about a good game idea. That's part of the jamming experience...

Of course the game has its flaws. Personally I couldn't find the time to do backgrounds or work a bit more on the sprites. I still have to fix a couple of things that will make it for the post-jam version (sometime soon I hope). I would have liked to make more diverse tiles, so we could have different "level worlds"... Perhaps that's too much to ask for in a jam :)

This bitbitjam edition has been great for Game Boy development. There have been lots of entries using ZGB, so I'd like to specially remark the awesome work that zal0 has been doing since a year ago, when everything started with our Pretty Princess' Castle Escape (formerly known as 'The Princess and the Spikes'). Hats off!!

Some friends of mine have also been using the engine to prototype velcro-sheepy games.

So as you can see, it's a great time to start developing for the old 8bit Nintendo handheld. Lots of new tools and lots of new people getting involved. What are you waiting for?!

I'd like to thank the creators of every tool we've used and, of course, bitbitjam organization team :) See you very soon! Maybe on the next GBJAM?
Publicado por Sergio en 14:56